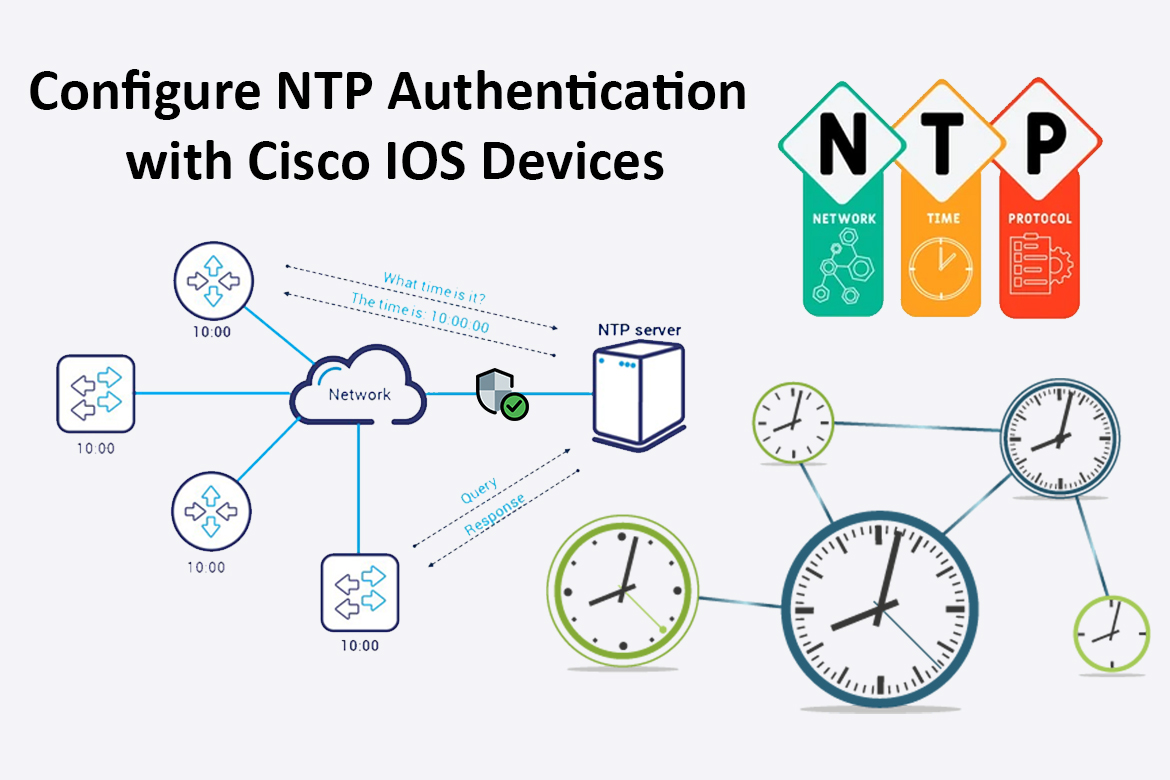 In a large enterprise network, having one time standard for all network devices is very important for management, reporting, and correlating events logged across multiple devices. The Network Time Protocol (NTP) is a UDP protocol responsible for synchronizing all devices’ system clocks in a network.

The implementation of NTP requires a client-server architecture and the NTP daemon operating in both client mode and server mode. Using NTP packets, the client and server exchange time stamp data that set up the clock on the client machine similar to the NTP server.

The network time is very important because if the device’s time is inaccurate, then it would be more difficult during an examination to correlate the system logs, disruption of authentication systems, etc. So what if the time synchronization is arbitrarily changed by attackers? Hence, the use of authentication mechanisms in NTP is vital to prevent the manipulation of time information by an attacker.

There are several ways to implement authentication on NTP depending on your NTP version.

If encryption is really required, the option is to use NTS or establish an encrypted tunnel (VPN) between the NTP client and the server. However, this also affects the network delay and jitter and thus reduces the accuracy of the synchronized time.

In this article, I will show you how to install an NTP server with NTP Authentication (Symmetric Key approach) and configure the NTP client as a CISCO IOS device.

NTP authentication checks the authenticity of the NTP server before synchronizing time with the NTP server. That helps you to identify legitimate server/s from unauthorized or illegal servers. NTP authentication works with a symmetric key that was already configured by the admin in their configuration and key files. Also, the “trustedkey keyid” attribute must be mentioned in the server’s ntp.conf file and the NTP process must be started on the server side for successful authentication.

The following figure shows how the NTP authentication works.

Update the System Repositories and install the NTP server.

To verify that NTP has been successfully installed, run the command.

In this article, I’m using the NTP pools located in Asia (asia.pool.ntp.org) as shown below.

NTP authentication is very easy to configure you only need to generate some NTP keys and trust them in your ntp.conf configuration file.

Using the following command line tool you can generate a symmetric keys file containing 10 MD5 and SHA (if OpenSSL is available). I’m running this command on the /etc/ directory and that generates a key file as well as a link called “ntp.keys”.

Once you generate the NTP keys, you can see them as follows.

The next step is to enable NTP authentication by telling the NTP server which key file to use and which keys to trust inside the /etc/ntp.conf file.

Once you have done the above changes, restart the NTP service and verify its status by the following commands.

That’s it about the configuration of the NTP server with authentication. You can now use those generated keys on your NTP clients to authenticate with a trusted NTP server.

To define an authentication key for NTP, use the following command in the Cisco device’s global configuration mode. Also, the message authentication support is provided using the MD5 algorithm, and the key type md5 is the only key type supported here.

Keep in mind to avoid using the md5 key with question mark character (?), because I wasn’t able to use the first key because of the question mark.

Now enter the following commands in the same prompt.

Note that MD5 NTP keys are ASCII strings that are converted to a “7” encryption type when sending the CLI command on a Cisco IOS device.

The clock is now synchronized. You can verify it by the following command.

You can list the NTP associations with details to see the authentication status. The first line for each NTP server shows an “authenticated”.

Furthermore, you can refer to the following link for troubleshooting and debugging steps.

NTP is a well-known and efficient protocol to ensure your systems are always synchronized with the correct time; also, the use of authentication mechanisms in NTP is essential to prevent the manipulation of time information by an attacker. Authentication establishes the authenticity of a packet’s source, whereas encrypting the contents of the NTP packets is not necessarily required because it only contains time information, which isn’t really sensitive in itself.

This website uses cookies to improve your experience. We'll assume you're ok with this, but you can opt-out if you wish. Accept Read More